Charles Hoke’s young life was spent working the family farm and sawmill. The farm has now been in the Hoke family for over 150 years. At the age of 14 Charlie had grown into a young man and started on his own buying and selling timber and working odd jobs to save money. A few years later he married Lois Goodson, of the Goodson-Drum clan, also of Lincoln County. They had three children; Charles, Jr., Brice and Dorothy.

In 1940, he purchased a small sawmill in Davidson, NC. He needed help but his children were too young to work, so he enlisted the help of two of his brothers, Alton and Woodrow. He made them partners a few years later but both decided to sell when they retired in the 1970’s.

In 1943 he realized the need for a retail store to supply the demand for building supplies in the rapidly growing area. He added a retail store and his children came to work at the company. Hoke Lumber Company was born.

Charles Jr. (better known as Junior) took over the operations in the 1970’s, but Mr. Charlie (Sr.), came to work everyday dressed in his usual attire; black dress pants, white shirt and a black fedora. His favorite place to be was in one of the two chairs that sat to the right of the front door. He waited for the next customer to come in and sit down and talk awhile. Junior ran the business until 2006. He worked six day a week, only taking a leave of absence to serve his country in the Korean War.

Junior and Dot were hard working. The company has, and always will be, honest and fair. This is how the company has become one of the oldest family owned businesses in North Carolina.

Hoke still has that feel of days gone by, where you can come in and have some coffee and take a look around. We will be glad to help you because that’s why we’re here.

We hope you’ll come by and visit us soon. 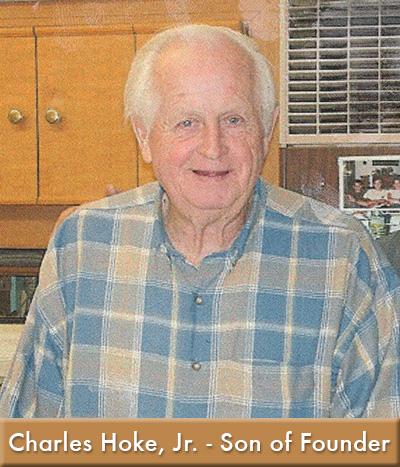